Lahainaluna graduates are among top wrestlers nationally at 101 pounds

One wants to be a certified public accountant, the other has teaching in mind.

For now, the Navarro sisters from West Maui are enjoying being roommates, national standout wrestlers for the University of Providence in Great Falls, Mont., and practice-room partners who clearly make each other better.

Ivy Navarro is a senior who will compete through next season as she finishes her degree in health and physical education.

Ira Navarro is a junior who joined her sister on a college team for the second time last fall — both sisters also wrestled two seasons, overlapping one, at Southwestern Oregon Community College.

“It’s actually been nice having her because she helps me get better at wrestling, she pushes me to get better every day, all that,” Ivy Navarro said of her younger sister.

Ira Navarro is majoring in accounting.

“It feels really good to have my sister back, having her on the same team, same school — we kind of do pretty much everything together,” she said. “We practice and work out together. It’s just nice having her back, having my workout buddy.”

Both plan to wrestle their final seasons next year while finishing their bachelor’s degrees.

Ivy Navarro said her goal is to become a physical education teacher at Lahainaluna High School “or any other school in Lahaina.”

Ira Navarro finished fifth at the Women’s College Wrestling Association Championship while competing for SWOCC last season — she also claimed titles at the Oregon Classic, the Spokane Collegiate Open and the Mike Clock Open. She was a two-time state champion for the Lunas.

Ivy Navarro also finished fifth at WCWA — the de facto national championship for the sport that is not yet recognized by the NCAA. Last season for Providence, the 2016 state champ for the Lunas finished second in the Dino Invitational and Missouri Valley Open, and won titles at the Cascade Conference and Spokane Open on her way to a No. 2 ranking in the national poll.

She relishes her big sister role.

“Since I get to experience everything first I get to pass it on to Ira,” Ivy Navarro said. “I share my experiences and it’s kind of like giving her a heads-up as to how it is.”

Both sisters claim to be the better cook.

“I wouldn’t necessarily agree with that,” Ira said. “We cook differently. I guess we’re both good cooks.”

Their new coach, Matt Atwood, has a quandary on his hands as to who will start for the Argos at 101 pounds. In their only match against each other in college, Ivy beat her younger sister 8-4 in the Spokane Open in November 2019.

“I would say pound-for-pound they are probably the strongest females in the world,” Atwood said. “Those girls are ridiculous how strong they are for their weight. So far I would also say they are two of the hardest workers in the wrestling room as well.”

Atwood recently took over the UP women’s program after moving from Midland University in Nebraska, where he had three Maui Interscholastic League graduates on his roster.

Right now, things are not easy with COVID-19 protocols to follow, both on the wrestling mats and off.

“It’s pretty tough, there’s no set schedule because we have to find teams that would be willing to compete or have a dual (meet) with us,” Ivy Navarro said. “It’s been hard to find teams.’

Ira Navarro has experienced single seasons without her sister around twice, both at Lahainaluna and SWOCC.

“But, yeah, it feels really good to have her back. Each time we get back together it’s just like old times. It feels the same as always.”

“Lately it’s been nice in Montana, I was expecting it to snow a lot since it’s the winter season,” she said. “It hasn’t been snowing a lot. There’s been really gorgeous sunsets. Almost, it reminds me of home.”

Both sisters are looking forward to their final season in college next year, hopeful that COVID-19 is under control. Both credit Lahainaluna for helping them prepare for their college wrestling travels on the Mainland.

“Lahainaluna definitely prepared me a lot,” Ivy Navarro said. “Because our practices were really tough back then, pretty much similar to college, like how we practice over here.”

Ira Navarro added, “It really prepared me well for the collegiate level because the Lahainaluna wrestling program was really tough.”

Both former Lunas feel for the current student-athletes in high school in Hawaii as sports will be missed for at least a calendar year here with recent cancellations.

“I would tell them to not lose hope, there’s always college,” Ivy Navarro said. “And they can continue their sport through college and their academics, too.”

Ira Navarro said, “That was really unfortunate news for the athletes in Hawaii, but I would just tell them, like, focus on their schoolwork now that sports are canceled. Focus on school, focus on college if they want to pursue college. If they really want to play collegiate sports, focus on school because that’s really what gets them to college, prioritizing school.” 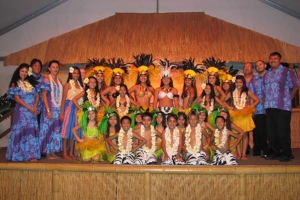